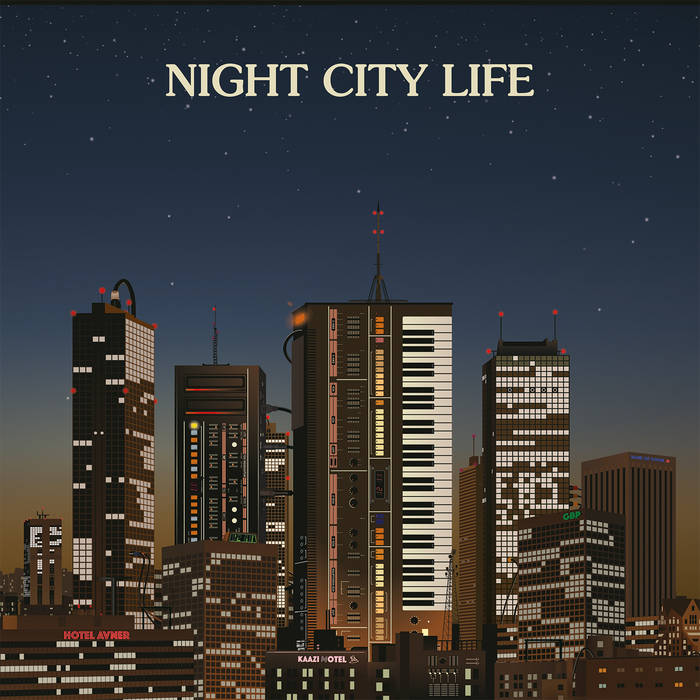 Should you find yourself taking a Thames-side stroll in the shadow of the City of London, keep an eye out for the headphone-clad figure of Ilan Pdahtzur. While be-suited bankers and frustrated office workers scurry home to their families, Ilan can frequently be found casting admiring glances towards the blinking lights of towering skyscrapers while filling his ears with the synthesizer-driven sounds of lesser-known 1980s dance music.

Ilan, an avid but little-known record collector best known for sharing the artwork of obscure and under-appreciated early-to-mid ’80s club cuts on his popular Instagram feed, has been digging for vibrant, kaleidoscopic records since his teens. Now, thanks to Spacetalk, he’s been given a chance to offer a glimpse into his neon-lit nocturnal musical world.

The result is Night City Life, a killer collection of 1980s synthesizer songs inspired by Ilan’s admiration for the glow of London’s late night skyline. Over the course of 13 essential tunes, Ilan escorts us on a vibrant sprint through rare Italo-disco, steamy South African synth-boogie, fizzing American freestyle, oddball Austrian electrofunk and so much more.

There are naturally a fair few sought-after cuts present, but also a fine selection of under-appreciated gems that for one reason or other have been all but ignored since they were released three and a half decades ago. In fact, some selections are so obscure that barely any information exists about them online.

Check for example Preludio’s “Mysterious Nights”, an evocative fusion of slow electronic grooves, dreamy chords and twinkling piano motifs previously buried on a lesser-known album of unremarkable German synth-pop, or the dollar-bin brilliance of Fragile’s sweet synth-pop gem “We’ve Got Tonight, Boy”, a cut that Ilan says is capable of “wrapping itself like tendrils around your soul”. He’s not wrong.

At the other end of the scale you’ll find the ultra-rare Italo-disco breeziness of Friend of Mine’s incredible “Just Your Pride” and Mac & Monica’s soulful 1986 South African synth-boogie cut “You’re So Good To Me”, copies of which regularly change hands for hundreds of pounds online. Ilan originally reached out to the men behind the record last year to tell them how one of their other forgotten gems had been played on a Boiler Room session; naturally, they were thrilled.

There’s plenty to admire elsewhere on the compilation, too, from the waves of analogue synths, bubbly melodies and bobbing beats of the instrumental dub version of Brian Tatcher’s “Hot Love” – a cold-war era cut inspired by the idea of love blossoming in the midst of a nuclear meltdown – to the Bobby Orlando-esque freestyle bustle of Janelle’s “Don’t Be Shy (Dub)” and the sparkling post-boogie brilliance of Jarmaz’s “Night City Life (Disco Remix)”, a track Ilan has listened to countless times while admiring the midnight skyline of his home city.